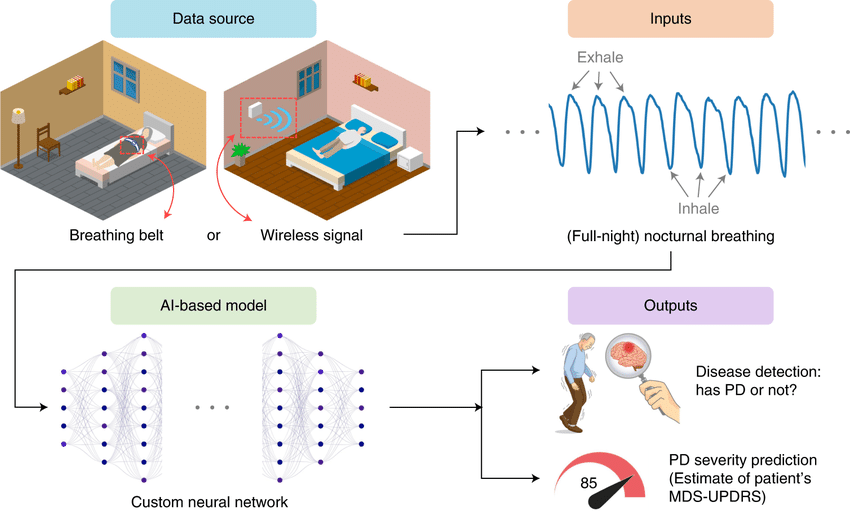 Overview of the AI model for PD diagnosis and disease severity prediction from nocturnal breathing signals.

Parkinson’s disease is notoriously difficult to diagnose as it relies primarily on the appearance of motor symptoms such as tremors, stiffness, and slowness, but these symptoms often appear several years after the disease onset. Now, Dina Katabi, the Thuan (1990) and Nicole Pham Professor in the Department of Electrical Engineering and Computer Science (EECS) at MIT and principal investigator at MIT Jameel Clinic, and her team have developed an artificial intelligence model that can detect Parkinson’s just from reading a person’s breathing patterns.

The tool in question is a neural network, a series of connected algorithms that mimic the way a human brain works, capable of assessing whether someone has Parkinson’s from their nocturnal breathing — i.e., breathing patterns that occur while sleeping. The neural network is also able to discern the severity of someone’s Parkinson’s disease and track the progression of their disease over time.

The MIT researchers demonstrated that the artificial intelligence assessment of Parkinson’s can be done every night at home while the person is asleep and without touching their body. To do so, the team developed a device with the appearance of a home Wi-Fi router, but instead of providing internet access, the device emits radio signals, analyzes their reflections off the surrounding environment, and extracts the subject’s breathing patterns without any bodily contact. The breathing signal is then fed to the neural network to assess Parkinson’s in a passive manner, and there is zero effort needed from the patient and caregiver.

The research team’s algorithm was tested on 7,687 individuals, including 757 Parkinson’s patients.

Katabi notes that the study has important implications for Parkinson’s drug development and clinical care. “In terms of drug development, the results can enable clinical trials with a significantly shorter duration and fewer participants, ultimately accelerating the development of new therapies. In terms of clinical care, the approach can help in the assessment of Parkinson’s patients in traditionally underserved communities, including those who live in rural areas and those with difficulty leaving home due to limited mobility or cognitive impairment,” she says.

This research was performed in collaboration with the University of Rochester, Mayo Clinic, and Massachusetts General Hospital, and is sponsored by the National Institutes of Health, with partial support by the National Science Foundation and the Michael J. Fox Foundation.